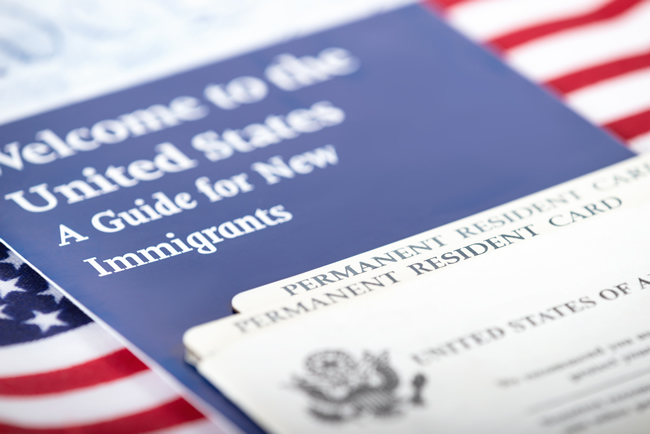 The definitions listed below include commonly used terms for immigrants and the conditions for their admission to the United States, as well as new terms created under the 1996 welfare reform law. The definitions follow a continuum of permanent to temporary to unauthorized immigrants.

The term is often used generally to refer to aliens residing in the United States, but its specific legal meaning is any legal alien in the United States other than those in the specified class of nonimmigrant aliens such as temporary visitors for pleasure or students. Immigrant is also used synonymously with lawful permanent resident.

Nonimmigrants are those who are allowed to enter the United States for a specific purpose and for a limited period of time, such as tourists, students, business visitors, diplomats and specialty occupations such as high tech workers or seasonal agricultural workers.

Also known as an illegal alien or undocumented worker, this is someone who enters or lives in the United States without official authorization, either by entering illegally or by violating the terms of his or her admission (for example, entering without inspection by the INS, entry based on fraud, overstaying the authorized period of admission or working without authorization). Approximately 300,000 undocumented immigrants enter and stay in the United States each year.

This is the process by which a foreign-born individual becomes a citizen of the United States. To naturalize, immigrants must be at least 18 years old; have been lawful permanent residents of the United States for five years (three years if married to a U.S. citizen); demonstrate a basic knowledge of English, American government and history; and have good moral character.

A person who flees his or her country due to persecution or a well-founded fear of persecution because of race, religion, nationality, political opinion or membership in a particular social group. Refugees are eligible for federal resettlement assistance. The year 2000 ceiling for refugee arrivals is 90,000. The term "refugee" as a legal definition includes both those admitted as refugees into the United States and asylees-those who are already present in the country when asylum is requested and granted.

The term, created in the 1996 welfare reform legislation (P.L. 104-193), refers to lawful permanent residents, refugees, Cuban and Haitian entrants, asylees, aliens paroled into the United States for a period of at least one year, aliens granted withholding of deportation by the INS, aliens granted conditional entry into the United States, and certain battered alien spouses and children. "Qualified" immigrants are generally eligible for federal public benefits on the same basis as citizens if they entered before Aug. 22, 1996, when the welfare law was enacted. Qualified immigrants entering after Aug. 22, 1996, are generally barred from federal assistance for five years. Different restrictions and limits apply to qualified immigrants' eligibility, depending on the immigration category.

PRUCOL is not an immigration status provided by the INS; rather, it is a term that applies to aliens in the United States " ... under statutory authority and those effectively allowed to remain in the United States under administrative discretion." Before enactment of the 1996 federal welfare reform law, PRUCOL status meant that an alien was considered to be legally residing in the country for an indefinite period for the purpose of determining benefit eligibility for public assistance, including Medicaid. Examples of PRUCOL include those granted indefinite voluntary departure, those residing in the United States under orders of supervision, aliens granted stays or suspension of deportation, and aliens whose departure INS does not contemplate enforcing.

The term means any immigrant who is not a "qualified alien," including undocumented immigrants, nonimmigrants and most PRUCOL immigrants. "Not qualified" immigrants are ineligible for federal, state and local public benefits covered by welfare reform, unless a specific exception applies.

Sponsors, Affidavits of Support and Deeming

In the past, immigrants who entered the United States to rejoin families were often, but not always, sponsored. Beginning Dec.19, 1997, immigrants who are seeking to join their families in the United States must have an affidavit of support from their sponsor(s). (Note: Refugees are not sponsored immigrants. Employment-based immigrants are generally not sponsored.) Sponsors must now be citizens, nationals or lawful permanent residents; age 18 or over; a resident of the 50 states or Washington, D.C.; and the petitioner for admission of the immigrant. Sponsors must sign an affidavit of support, now a legally enforceable document, agreeing to financially assist the immigrant. The 1996 immigration reform law requires sponsors to have an income at 125 percent of the federal poverty level and to maintain the immigrant at that level. Active duty military personnel must have an income of 100 percent of the federal poverty level to become a sponsor.

Deeming means that the income and resources of the sponsor and his or her spouse count as the immigrant's income and resources in determining the immigrant's eligibility for federal means-tested public benefits. Previously, deeming applied only to AFDC, SSI and Food Stamps. Deeming now applies to all federal means-tested programs until the sponsored immigrant becomes a naturalized citizen or has accumulated 40 quarters of qualifying work. Qualifying quarters may be credited to a spouse or minor child. Deeming for all federal and state means-tested programs applies only to the newly executed affidavits of support, effective December 19, 1997. Newly arriving immigrants are subject first to the five-year bar on federal benefits. Then, deeming applies for federal benefits until the immigrant attains citizenship or 40 quarters of work.